Lucky Patcher: Lucky Patcher, as we all know is the best way to modify a game, especially when it comes to hack locked contents from our favorite games. However, hacking a game is not the main function of the Lucky Patcher. Find here a collection of Lucky Patcher Alternatives below. 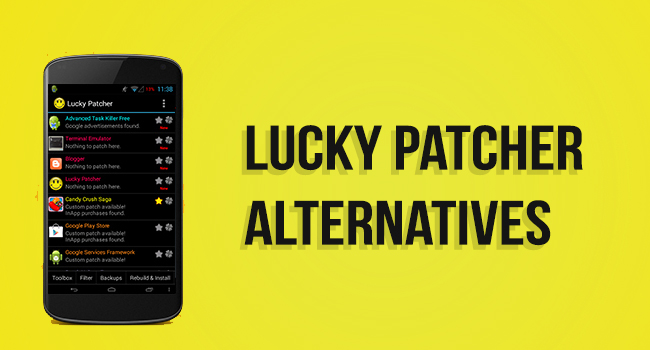 Lucky Patcher is a tool used mainly for removing ads from the apps. Usually what happens is that some of the apps have preloaded ads which pop up while running the app. So, this tool here helps in removing the ads completely.

It also helps in modifying some of the selected apps. Also, it helps to obtain the in-app purchases of some selected apps. Likewise, there are some few more similar apps that have the same functionality alongside some other features. So, let’s list them up.

When it comes to hack in-app purchases of any app, the first name that strikes our minds are none other than Freedom. It is one of the most popular apps in the world, known worldwide for its performance and deliverance. It sure is among the best apps for the purpose of hacking and modifying apps.

The Freedom app creates a duplicate installment from the Google PlayStore

Creehack is another big name in this field. It is one of the best in the market and because of that, it has gained an enormous popularity in a very short period of time. It is easy to use and has a very friendly user interface which makes it more comfortable to use and a choice for every user to hack in-app purchases of the apps in their respective device(s).

Another highlighting factor about this Creehack app is that it doesn’t require a rooted device to work on. Especially for games, as we all know that these days games have been offering a lot of locked features that requires being purchased spending a high amount of money. But the Creehack solves our every problem and is the ultimate solution for such kind of issues, as it deliberately hacks in the game app and provides us the ability, or let’s say “power” to obtain the locked contents in the game. It is Best Similar App like Lucky Patcher Apk.

So, this Creehack app is something that the users would surely need in the long run.

Appsara, another efficient application as the alternative for Lucky Patcher, which must have suggested at least its main function. Yes, that’s right; the Appsara app is also a similar app to that of the Lucky Patcher. It sure does serves the purpose very well, but unfortunately, this app doesn’t work with all the apps.

Only a few selected apps are supported by this app, which is the only bad thing about this app. But keeping the negative point aside, this app doesn’t require root access, which is actually very good and also keeps the device secured, which is a very good thing. The app sure does not support all the apps but is very efficient regarding the few selected apps that it works on.

Leoplay Card is actually one of the best Lucky Patcher Alternatives and is one of the best in the kind, i.e. hacking in-app purchases in an app. The Leoplay Card doesn’t require any kind of rooting or patching. It is, in fact, a very good thing that this kind of app works without any rooting, as it has been seen earlier, and also the experts also suggest that rooting is not good for the devices. So it is indeed a boon since it is working without any root or such and also it does work without creating any further issues or problems.

As it has been seen that these apps do help a lot in making better usage of apps and smartphones. These listed Lucky Patcher Apk Alternatives  are in fact of great usage to mankind regarding obtaining the in-app purchases.